Migration and hospitality - lessons from Svalbard

Imagine a place on the move - rocks that travel thousands of miles.

Imagine a world where people are free to move where they want – a world that extends a welcome to strangers.

These two ideas connect Nowhereisland, the art project, to the archipelago of Svalbard in the High Arctic

The territory that makes up Nowhereisland has been extracted from Svalbard. The land that makes up Svalbard, which is now a little over 1000km south of the North Pole, was once (about 800 million years ago) very close to the South Pole. On its journeys, it crossed the equator (about 400 million years ago). If you visit Svalbard, and are inclined to look, you can see red rocks that look as though they belong in Arizona or Alice Springs. This is red Devonian sandstone and was formed when Svalbard was approximately where Morocco is now. Thanks to the more recent travels of us humans, rocks have come and gone from this place on the edge of the world over the last 400 or so years. They have been used in the ballast of ships. In the first decades of the twentieth century, Ernest Mansfield, an eccentric English capitalist mined marble from a quarry at Ny London (New London) believing it would make him rich(er). The marble, cracked and shattered by freeze and thaw, fell apart on its voyage home to England and had to be thrown into the sea. Coal is still extracted to fire the industries of Russia and Scandinavia. Dotted around present day Svalbard there are bits and pieces of bricks from the Netherlands (yellow) and England (red) left by explorers and adventurers. In the natural world a rock out of place is referred to as an “erratic” – it is usually possible to trace its origins and account for its travels in the ice of a glacier. These rocks (the marble, the coal, the bricks, the rocks that will make up Nowhereisland) are also erratics, but moved by us – by humans busy journeying and connecting the world.

Rocks are not the only thing that moves to and from Svalbard. People do too. For a long time Svalbard was considered to be “no-man’s land” and not part of any nation. Even now the islands have an open immigration policy in which anyone is welcome as long as they have a job. No visas or work permits are required. The expedition team that gathered the material that is becoming Nowhereisland encountered a diverse array of people from across the world who have made a home in Svalbard – Ukrainian builders, a Thai woman working in a pizza restaurant, scientists from 30 nations in the world’s northernmost settlement at 78° North. Through the journeys of rocks and people, Svalbard shows us how even the remotest and ‘inhospitable’ of islands is not separate but connected. Its history and future are part of a common story of journey and rest.

Rather than people moving in search of a place to call home, Nowhereisland is an island journeying south in search of its people. In the summer of 2012, towns around the coast of southwest England will decide how to meet and greet this roving nation. How will this island be welcomed? This raises the twin issues of migration and hospitality.

The question of how to be hospitable to migrant people is amongst the most significant issues facing the modern world. The infrastructures of transport and communication that help produce a globalized world make it easier for people to dream of travel and then to journey in search of a better life. This was, in part what Ernest Mansfield was doing when he moved north to establish Ny London. It was what countless British explorers, adventurers and migrants have done for centuries, looking for fortunes, adventure or, most often, a better life. And then there are the refugees who are forced to escape their home country due to conflict, oppression or natural disaster. Often these migrants and refugees are met with hostility from the populations and governments of host nations. Every year, it seems, there are accounts of desperate immigrants dying as they take great risks to enter a place where they believe they can lead a better life. Once there, they are often subject to local hostility and dangerous work conditions. This has certainly been true in the UK.

There are also tales of great hospitality. Before World War Two, in the face of hatred from Oswald Mosley’s fascists, working class eastenders provided food and shelter for Jewish immigrants escaping Nazi Germany. Today, all over the UK, there are individuals and groups attempting to make migrant others welcome.

Workers in the “hospitality industry” are trained to make visitors want to come back. Forms of hospitality have been an important part of different cultures through human history, particularly among people who are themselves nomadic. Ultimately, hospitality, means extending a welcome without limits. It means nurturing a place where all will be accepted regardless of point of origin or form of employment. Nation-states, as they have traditionally been understood, have fallen short of true hospitality. They have exercised hospitality as a form of sovereign power through, for instance, the granting of a right to residence. The UK now has a long list of who is a desirable visitor and who is less desirable. It is the gap between our desire to be hospitable to others and hospitality as something which nations can grant or deny that has proven problematic. Hospitality has become a kind of power over others rather than a genuine and open welcome.

My hope is that Nowhereisland formed from roving rocks will allow us to think about migration and hospitality outside of the notion of the nation-state. In an ideal way we can imagine a world with no limits to migration – where everyone is free to move where they wish. We are a long way from that point. Perhaps a more realistic wish is that the rocks which form Nowhereisland bring some of Svalbard’s hospitality with them. An immigration policy in which national-origin or form of employment has no relevance – in which all are equally welcome - would be a good starting point. 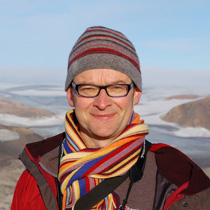 A Professor of Human Geography at Royal Holloway, University of London since 2006, Tim’s research focuses on place and mobility, leading him to examine the cultural history of the tramp in the United States.