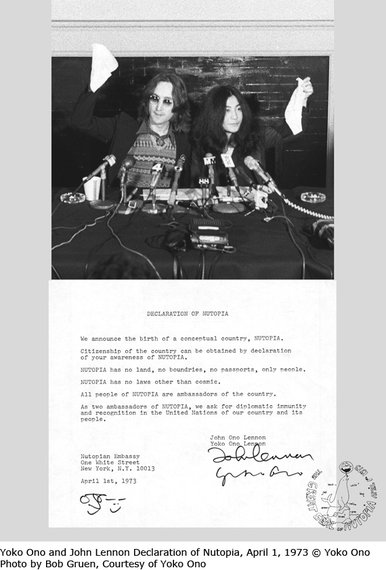 We announce the birth of a conceptual country, NUTOPIA.

Citizenship of the country can be obtained by declaration of your awareness of NUTOPIA.

NUTOPIA has no land, no boundries, no passports, only people.

NUTOPIA has no laws other than cosmic.

All people of NUTOPIA are ambassadors of the country.

As two ambassadors of NUTOPIA, we ask for diplomatic immunity and recognition in the United Nations of our country and its people. 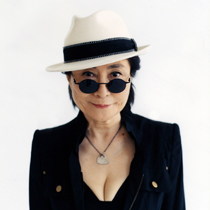 YOKO ONO is a multi-media artist who constantly challenges the traditional boundaries of art. Known for her groundbreaking conceptual and performance pieces, experimental films and music. Her creative influence and prolific artistic output continue to inspire new generations.

In 2009, she was the recipient of the prestigious Golden Lion Award for Lifetime Achievement from the Venice Biennale. That same year, she released her newest album with the Plastic Ono Band, “Between My Head and the Sky.” In 2011, the Hiroshima City Museum of Contemporary Art honored Yoko with the prestigious Hiroshima Art Prize, for her dedication to peace activism through art. To coincide with the award, the museum showed a large exhibition of her new work, “THE ROAD OF HOPE.”

Reflecting on her reputation for being outrageous, Yoko smiles and says, “I do have to rely on my own judgment, although to some people my judgment seems a little out of sync. I have my own rhythm and my own timing, and that’s simply how it is.”

From gallery to stage to social media platforms, Yoko Ono brings a message of peace to the world. Ms. Ono’s ongoing projects are detailed at www.IMAGINEPEACE.com.

For her contribution to Nowhereisland, Yoko Ono contributes the original declaration of Nutopia from 1973.